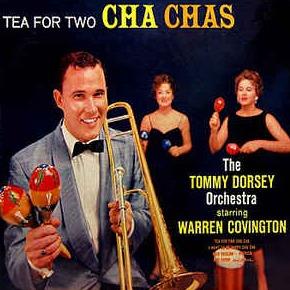 Originally released as a single in 1958, “Tea For Two Cha Cha” was a tremendous worldwide hit and a million seller by 1960. It was an arrangement of the famous Irving Caesar/Vincent Youmans popular song “Tea For Two” from the 1924 musical “No, No Nanette”, in a cha-cha tempo performed by The Tommy Dorsey Orchestra starring Warren Covington. Covington took over The Tommy Dorsey Orchestra after Dorsey’s death in 1956; contributed to the cha cha craze and led the band to further success.

The resulting album TEA FOR TWO CHA CHAS was equally popular and a follow up LP “MORE TEA FOR TWO CHA CHAS” resulted. Both albums have been re-mastered and are contained on this CD release with all tracks in stereo. Also included are cha cha hits such as “Rico Vacilon”, “Sweet and Gentle”, “Patricia” and “Corazon de Melon”.

Only 2 left in stock

4 I STILL GET JEALOUS OHA CHA

2 I WANT TO BE HAPPY CHA CHA